The EQUIPE VELOSELECT CYCLING TEAM took part in the IGA/DESJARDINS GP Ste Martine on Sunday April 28 2013. Our guys were ready as all of the junior teams were in attendance  Our riders were prepared  for battle as the the combined junior/senior 3 peleton totaled 107. The boys were prepared to chase and get in the breakaways and if it came down to a sprint we also could play that card. The early break with Shawn Turcotte didn't stick but 2 Rocky Mountain Lessard Bicycles riders did. So Miguel Lukaszewicz attacked on his   PROLOGUE SUBIACO equipped with RHUS WHEELS. He was soon joined by a few other riders both Juniors and Senior 3's. The group of seven including the original Rocky Mountain Lessard Bicycles riders now contained Miguel and other teams were represented. So the peleton didn't react and the break was successful going up the road  Unfortunately a big crash occurred on the third lap and took half of our guys down. So nothing was broken but their pride to contribute the teams effort  to gain a  W on the day.  Our team was using the CYTOMAX Pommegrante Berry Electrolyte and CYTOMAX  Berry Drops to fuel their race performance throughout the day.As the temperatures were in the 20's a hot day compared to the 2012 edition and the 2011 edition were it was snowing in the morning then cleared up in the afternoon this was a gorgeous day!! Miguel and the others got caught on the final lap as they couldn't sustain their pace so the peleton captialized on this and reeled them in. In the finale it was bunch sprint won by Simon Ouellet of Rocky Mountain Lessard Bicycles.We had Shawn Turcotte place 7th Rapael Gagnon 8th, and Miguel Lukaszewicz 10th. Laurent Levasseur was thirteenth in the sprint. So three riders in the top ten and one rider in the top 15th. It was a good team effort by our guys and we will continue to build momentum each race. 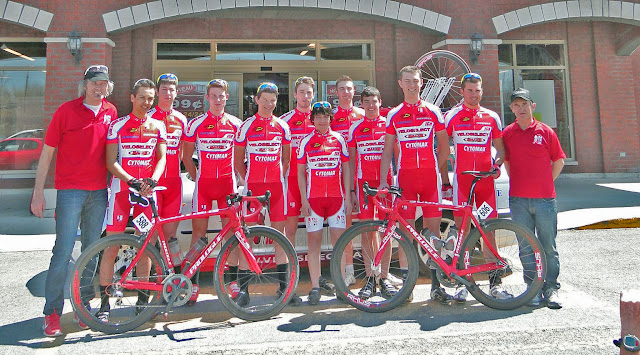 Our season has started off in a great way and we can't wait till the next race!! We hope to see you out there cheering on our team. Please visit our blog at http://veloselect.blogspot.ca and thanks for reading!