The EQUIPE VELOSELECT CYCLING TEAM team has been busy racing in the GP BROSSARD and The GATINEAU GP in the past three weeks of the month of May. Our team attended the GP Brossard on Sunday May 5th  and we wanted to race 100% and  leave nothing behind. While spraying the boys legs with KOOLN'FIT and fueling them up with CYTOMAX Pommegrante Berry and using Tangerine Energy drops our boys were ready for battle. The goal was to getting the break and get away so we could be in a better position and sprint from a small group of riders as we didn't have the full team in attendance due to injuries sustained at the IGA DESJARDINS GP STE Martine Race. So our plan was executed and Shawn Turcotte and Rafeal Gagnon went in to the break and eventually caught the peleton and "lapped" the field. The Sprint Finale was within our grasp but it wasn't meant to be a lapped rider wasn't pulled  and caused chaos in his sprint to the line. Luckily Shawn Turcotte stayed upright and had to brake fiercely and start to sprint again on his RHUS Wheels equipped with MAXXIS COMET Tires with our first W of the season within grasp.Shawn finished fourth just off of the podium and didn't crash.
. 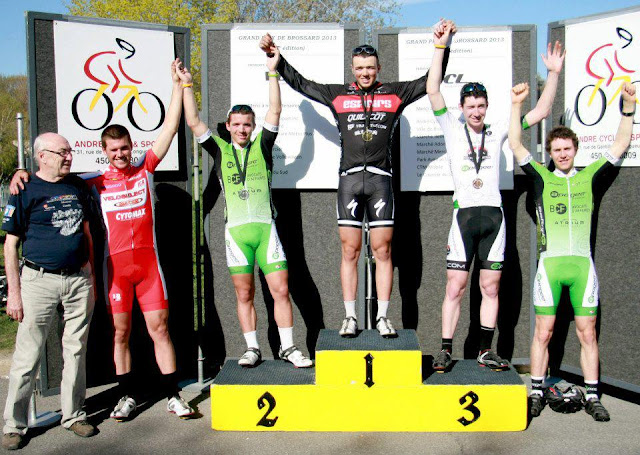 So after drinking MUSCLE MILK for Recovery our boys regrouped for the GP GATINEAU in GATINEAU Quebec on Saturday May 18 2013.
We had 7 riders in attendance and would see if our wounded warriors were healing in this fast paced race. All the teams were represented except for Andre Cycle KAYCAN RDS. So we would see how the race went. It was very hot for a may long weekend and a lot of CYTOMAX was used to help refuel our athletes.   So our team took the bull by the horns and were attacking but nothing would stick until three riders went clear sans our team. So we were the only team to attempting to organize a catch of the break. But there was no cooperation and when the boys got other teams to finally lend a hand it too little to late. So Espoirs Qullicot TRJ telecom and a few others chased the break a few other riders joined it but it was gonna be a sprint from the break of the 7 riders which also included a few senior three's as well. Our rider Miguel Lukaszewicz on his Team  issue PROLOGUE SUBIACO equipped with RHUS Wheels racing on MAXXIS TIRES did a lot of work finished a strong tenth. Along with Francis Bertrand 12th and Wil Etherington 18th after lending a hand in catching the break. We now regroup and look forward to our next events GP ST Raymond and GP Charelvoix.

Thanks for reading and until next time