Here is a updated race report for the VELOSELECT CYCLING Team for the week ending June 8 2013.  Our team went to the GP ST Raymond Race last Saturday and Sunday
May 25 26 which was the the selection race for the Quebec Team for the Canada Games for the U23 category or known as the Espoirs category. Our riders faced horrendous conditions and finished and gained invaluable experience riding with a fast senior peleton. It was good preparation for the GP Charlevoix which is a huge race on our calendar.  So our game plan was to have guys go in the breaks and see where this would lead to.  The 1st stage was a criterium on Friday night and it so fast paced that the race was selected in the first five laps and our riders Shawn Turcotte and Rafeal Gagon made the selection. Shawn ended up in 10th and Rafeal tried to help him move up but to no success he finished 29th. So the time trial was ok so we wanted success to have a podium or top 5.  The 3rd stage following the time trial was a hill climb that was quite the event as well. We gave it our all but the boys came close but the fog was was as thick as pea soup and you couldn't see in front of you.
So for us going to the top we had quite the task of driving to the finish line.
So our day we said to our boys was the road race and all the riders wanted a W bad.  That Sunday I could feel a buzz in the air. Our team was fighting through out the weekend and this what Czeslaw and i wanted.
We had a quick meeting before the road stage and told the boys that this was our day. The stage was epic. We had a storm blow through on Saturday night that affected peoples power blew trees down and it was cold raining and 6 degrees this is only  that you  would only see on tv in the Giro d'Italia or the Tour de France with fog going down hills and you couldn't see two feet in front of you. We told our boys that if you kept getting through this day good things would come.  So we had 3 in the final selection when all was said and done in the final 35 km. A break of five riders rolled off the the front of the peleton at 25 km and we knew because of the nasty weather conditions it would be caught cause a break can't be sustained for the whole 120 km. So after the final selection Miguel Lukaszewicz Shawn Turcotte and Francis Bertrand made it to the dwindling peleton. so when it was Shawn Turcotte who made the final for the peleton of 5 riders scattered and the break of five gap was dropping very rapidly. Shawn Turcotte and David Drouin of the Apogee team dropped their other three riders who weren't as motivated as these two to catch the break.  So with 6 km to go they saw them for a minute. Then they knew that they were going to catch it and fight for the podium or a W.  With 5km's to descending at 70 km per hour Shawn and Dave were going through a ninety degree turn and a motorcycle that is part of the security detail was in the wrong place at the wrong time and cut off Shawn's line he had to go straight and hit a dirt road and he didn't crash but stayed upright he got got back up and raced as hard as he could to try and catch them. But that oopsie cost him 45 seconds. It was a valiant effort  though and chapeau to Shawn for putting up such a fight to reel in the break!! He finished 7th and the boys weren't far behind. We also have to mention that other teams were having mechanicals and flat tires. Our MAXXIS tires were bulletproof and our K-EDGE Catchers were also keeping our guys from getting dropped in the selection process by keeping our chains intact! Our SHIMANO Ultegra gruppos were awesome and no mechanicals.

So all in all our guys are getting better and we can for see good results in the races to come a Few pics form the various stages of the GP de Charlevoix
So until next time, 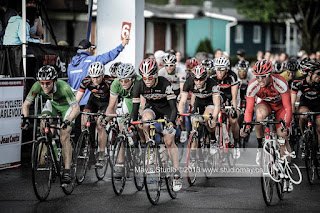 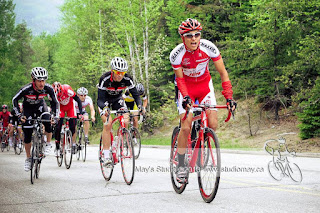 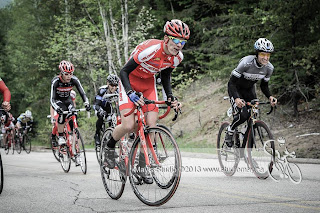 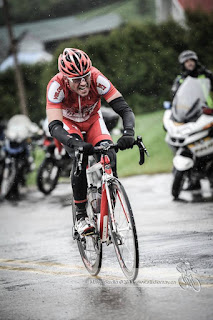